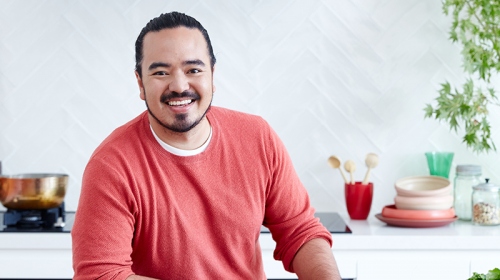 Instantly recognisable with his warm smile and topknot, SBS’s Award Winning Destination Flavour host and winner of MasterChef Adam Liaw is one of Australia’s favourite cooks, authors and television presenters.

Articulate and witty, Adam brings a unique perspective to everything he does. He is a regular columnist for Fairfax – The Sydney Morning Herald, Sunday Life and The Age.  Adam also writes for international publications The Guardian, The Wall Street Journal, Hong Kong, SBS online.

Born in Malaysia to an English-Singaporean mother and Hainanese Chinese father, Adam’s family lived in several countries through his youth and his culinary influences are far-reaching. He was an active cook from an early age, regularly cooking for his parents and seven brothers and sisters since he was eight years old.

Adam holds university degrees in science and law and practiced law for 11 years, most recently as the Head of Legal and Business Affairs for Disney Interactive, Asia Pacific based in Tokyo. His love affair with food and cooking blossomed during this time and he returned to Australia in 2009 to compete in MasterChef. In July 2010 over 5 million people tuned in to watch him win the second series MasterChef. His victory still remains the most watched non-sporting event in Australian television history.

A keen social media influencer, Adam’s online presence was ranked by Klout in 2015 as the most influential in the Australian food industry. Adam is Unicef Australia’s National Ambassador for Nutrition and in June this year he was given the honour of being named the Goodwill Ambassador for Japanese Cuisine acknowledging his significant contributions to promoting regional Japanese cuisine in Australia.

Adam lives in Sydney with his wife Asami and their son Christopher and daughter Anna. He speaks English, Japanese and basic Mandarin. Between his TV commitments and writing cookbooks, recipes and columns, he makes regular appearances at events and food festivals, and he usually has time to send a tweet or two.