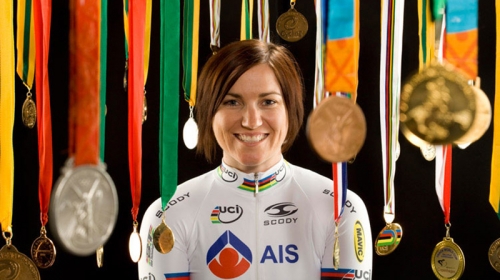 Anna Meares showed the true spirit of a champion when she overcame a terrible cycling accident in 2008 to win silver at the Beijing Olympics and a gold and bronze at the London Olympics. Anna’s story is an inspiring example of courage, determination and overcoming enormous obstacles to achieve great success.

From humble beginnings in a small Queensland mining town, Anna Meares rose to prominence through her skill as a cyclist. She won gold for Australia at the 2004 Athens Olympic Games, setting a new world record time in the Women’s 500 metre time trial. She also received an Order of Australia medal for her achievement. Tragedy struck in January 2008 when a cycling accident at the World Cup left her with a hairline fracture in her C2 vertebrae as well as other injuries. She was back on her bike within weeks and managed to qualify for the Beijing Olympics. In August 2008, she won the silver medal at the Olympics in the Women’s Individual Sprint, followed by another gold at the London Olympics in 2012. In December 2012, Anna was awarded the Sir Hubert Opperman Cyclist of the Year medal, along with the People’s Choice award and the Women’s Track award at the Australian Cyclist of the Year Awards.

After growing up in the small Queensland mining town of Middlemount, Anna was inspired to become a cyclist by her sister Kerrie after they watched Kathy Watt win the cycling gold medal at the 1994 Commonwealth Games. Anna started cycling competitively the same year, aged just 11, with the nearest cycling track around 300kms away in Mackay. Two years later, the family moved to Rockhampton, making the training schedule far easier.

Anna’s training paid off when she not only won the gold medal at the 2004 Athens Olympics, but she was also the youngest Australian track cyclist to win Olympic gold, and the first Australian female track cyclist to win an Olympic gold medal. To top it off, she also set a new world record in the Women’s 500 metre time trial of 33.952. She also won a bronze medal in the Women’s 200m Sprint, and was later awarded an Order of Australia medal for her achievement.

Her training was in full swing when in January 2008, Anna broke her back at the Los Angeles World Cup. She was thrown from her bike in a collision with other riders and sustained a hairline fracture to her C2 vertebrae. If it had been just two millimetres more, she would have been a quadriplegic on a respirator for the rest of her life. Her other injuries included a dislocated AC joint in her shoulder, heavy skin grazing, torn tendons and muscle tissue damage. The accident immediately threw her plans for the Beijing Olympics in August into doubt, and it was possible she may never ride again.

She was determined however, and was back on the track within just ten days of the accident, albeit only tentatively. At the Melbourne time trial four and a half months after the accident, she was easily able to eclipse the Olympic qualifying time set by selectors in the 200 metre sprint. She was also very close to achieving a personal best time. At the Beijing Olympics, with the goodwill of Australia behind her, she won the silver medal in the Women’s Individual Sprint.

At the 2012 London Olympics, Anna won gold in the Sprint and bronze in the Team Sprint.