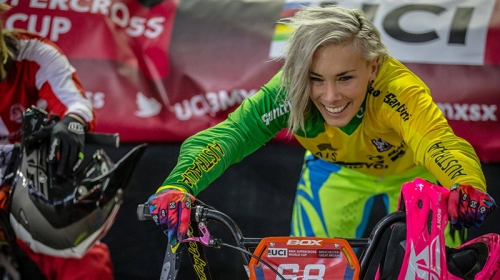 Caroline Buchanan classifies herself as more than a cyclist – though her passion for anything with two wheels is what drives the dream. An athlete, business woman, social media influencer, mentor, proud advocate for women in sport and reality television tragic, World Champion and Olympian Caroline has been ear marked as one of the new guard of Australian Athlete.

Her down to earth attitude makes her one of the most approachable Australian sportswomen, despite having achieved six elite World Championships and twenty Australian National titles over three cycling disciplines.
Equally at home dodging trees downhill in the mud on a mountain bike, or flying over jumps on a BMX bike, Caroline has dominated both cycling disciplines, and she gets just as much enjoyment teaching two year olds how to navigate their very first turn on the track on a balance bike.

Whether she spends her day in the gym or in front of a TV camera, presenting to a corporate crowd or striking a pose for a fashion photographer, Caroline brings passion and persistence in her pursuit of perfection.

Caroline takes great delight in encouraging the next generation of bike riders by remaining naturally friendly and always approachable. She loves any opportunity to participate in clinics to teach kids around the world the joys of racing and partaking in a sport that requires both athletic and mental agility – a sport that is universally available to all children no matter what their standard. Caroline Buchanan is wonderful role model, excellent communicator and a self starter when it comes to understanding the needs of sponsors. Caroline manages her on line presence personally. She produces her own blogs that are followed around the World.

Caroline understands the modern marketing and promotional techniques and uses them to communicate in a very professional and sophisticated manner. Caroline is a natural leader who is inspiring. Her work ethic in training and racing is uncompromising.

Caroline is an exuberant young lady that has a responsible attitude to everything she does. She is a positive influence on everybody she meets.

Now in her early 20’s with race wins all over the World, Caroline Buchanan is the perfect role model for the youth of Australia and the World. Brands that want to capture the youth market need look no further than Caroline as a Brand Ambassador.