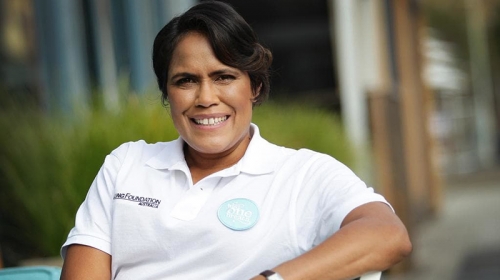 Cathy’s greatest moment, however, came at the Sydney Olympic Games in 2000. Having become the first competing athlete in history to light the Olympic flame, she claimed an emotional gold in the 400m in front of an exultant home crowd to realise her lifelong dream. In 2011, Cathy was elevated to “Legend” Status in The Sport Australia Hall of Fame.

Today, Cathy concentrates on charitable work through the Cathy Freeman Foundation, which focuses on educational programs to help indigenous children fulfill their potential in school and beyond and realise their dreams too.

“Catherine was absolutely wonderful all day. Every Casey staff member that came in contact with her was impressed by her relaxed and down to earth personality. More importantly feedback from the public has been outstanding. Many children have told us meeting Catherine at the GP Run was the best day of their lives. A lot of feedback we have received from the public was that this year was the best GP Run ever and I’m sure an enormous amount of that feedback came to us because of Catherine’s performance on the day.”
City of Casey