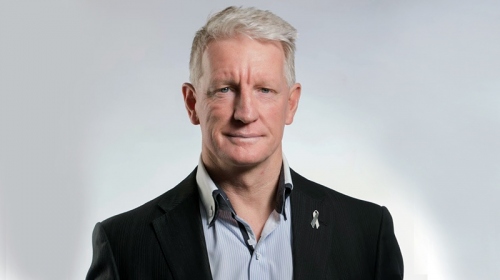 Shot 14 times in less than 5 seconds with a high-powered semi-automatic rifle. Lying on the ground for 3 hours before he could be rescued. Two and a half years later he returned to full duties. Derrick McManus’s history goes beyond resilience and epitomises human durability.

Resilience is problem solving in the moment and bouncing back. To survive that shooting Derrick had to be more proactive, he had to know exactly what to do before it even happened so he could sustain an optimal performance. Derrick has now called that system ‘Human Durability’. The School of Psychology at University of South Australia see such potential in his philosophy they are collaborating with him in his on going research. This is very compelling.

Derrick’s story and success is pure inspiration on so many different levels.

Audiences are captivated by the detail and the drama of the shooting but empowered by remarkable understandings of human performance. There will be deep insights, grimaces of sadness, and tears of laughter.  Every story and laugh has either a direct or subliminal connection to improving their personal confidence and performance. Audiences learn how to build stronger confidence and self-esteem and still stay grounded; how to maximise their efforts while also reducing stress and anxiety; how they too can defy the odds with the skills they already have.

Resilience and Durability are skills that everyone can learn and hone for maximum effect. Derrick tailors every presentation to the needs and levels of his clients with a vast range of topics he can cover.

Derrick has spoken on 4 continents to date. Everyone leaves inspired, empowered and more confident in their own abilities after hearing what Derrick has to share.

He has been featured on A Current Affair (Channel 9), I Survived (Fox) and Good Morning Australia (Channel 7) and others, as well radio in almost every state and is still in demand.

Derrick was a sniper, recovery diver and counter-terrorist operative with the SA Police Special Task and Rescue (STAR) Group when he was shot 14 times in less than 5 seconds. He lay bleeding for 3 hours before he could be rescued. The first doctor to reach him thought he was dead. The doctor later said, “I actually don’t know how he survived, he’s an incredible human being.” Derrick’s survival is inspiration to all that individuals can defy the odds; nothing is impossible.

After the shooting Derrick insisted on speaking with a psychiatrist ASAP. Everyone expected Derrick would be in therapy for decades. However, after a single 3-hour appointment with a world-renowned trauma psychiatrist, Derrick was immediately psychologically cleared to return to full STAR Group duties. Obviously the physical recovery took much longer.

PTSD did strike 2 years after the shooting for reasons that Derrick is very happy to share. However, Derrick responded with the same philosophy that is now Human Durability. Because of his attitude and systems, Derrick was cleared of PTSD just 1 month after being diagnosed and again returned to full duties with STAR Group. This story alone is inspiration for anyone in a stressful environment or dealing with mental health issues of their own. Derrick is now specifically trained in Mental Health First Aid.

Derrick’s story and success is pure inspiration on so many different levels and has wowed audiences around the world. Now, combined with the Human Durability philosophy, it’s one of the most powerful presentations you’re likely to see. Yet Derrick is grounded and authentic. His quick wit and humor enable him to connect and engage with people from 10 years old to CEO’s.

He was awarded the inaugural SA Police Bravery Medal in 1989 when, prior to STAR Division, he and his partner wrestled a gun from the hands of the man intent on shooting them. He also has a long history of community involvement ranging some 40 years. He was awarded an Australia Day Young Citizen of the Year Award (1980), Ambassador to the Australian Red Cross Blood Service (1997 – 2000). He is currently a White Ribbon Ambassador and volunteers with Vision Impaired Cycling, Down Syndrome and Motor Neurone Disease.

“One of the most powerful presentations I’ve ever seen and truly remarkable in its life lessons.”
Cathie Crampton – Head of Property Management, Harcourts International

“All my people asked for after Derrick’s workshop, was to have ‘more time with Derrick’.”
Squadron Leader, Myles Clarke – RAAF Air Warfare Centre, High Performance Program

“So powerful that we booked Derrick for conferences in four states.”
Bob Hobbs – Austbrokers Holdings Ltd

“Westfield was looking for a speaker who could demonstrate the importance of (1) operating as a professional team, (2) planning and preparing for all eventualities, (3) setting and delivering goals. Derrick’s life experience was a natural fit and in addition he was able to structure his speech to touch on our corporate objectives. The audience was inspired by his courage, tenacity and honesty and having listened to and/or engaged over 20 motivational speakers I rate Derrick as one of the best we have encountered.”
Security Westfield

“You’ll get a lot out of Derrick. He holds your interest. He will inspire you. He is so energetic and enthusiastic. Most importantly, he shows a genuine interest in you and what you need.”
Macquarie Wealth Management

“If Derrick could conjure up all the will power to endure what he did, and win through, then so can we. This is exactly the commitment we were looking for in our people.”
Jeff Boundy – Mitsubishi Motors Australia

“Derrick McManus was very good to deal with leading up to and on the day of the event, he was accessible, easy to talk to and very professional I would recommend him, he is a great communicator with a great story. Speaking personally I though he was one the of best presenters I have seen – I think this is because of his down to earth approach and the unique story and experience.”
Rosemary Irons – Capstone Financial Services

“Derrick was excellent! The audience feedback was great and they loved his presentation and story. If people could adapt the qualities Derrick discussed in their lives, we would all be much better off. Thankyou for your assistance.”
Angelo Mignanelli, Project Manager – Flinders Medical Centre

“Derrick’s situation was such that I felt many parallels could be drawn to illustrate goal setting, teamwork, perseverance and determination, training focus and courage. He delivered his talk in a very natural, open and insightful manner. It had a very positive effect on my staff.”
Geoff Qurban – State Director, Tmp.worldwide 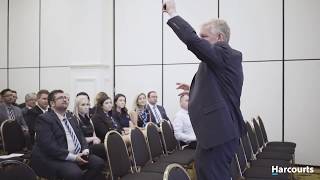