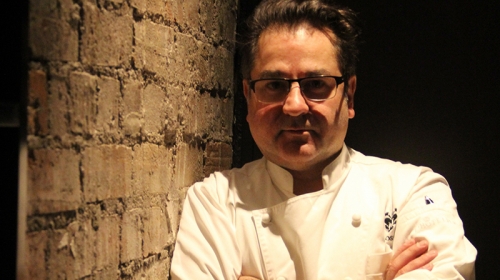 Guy Grossi is an affable, passionate and playful master chef who specialises in pure Italian cuisine. He commands three kitchens with discipline, song, music, creativity and devotion. Guy is the driving force behind one of Melbourne’s oldest restaurants, Grossi Florentino in Bourke Street Melbourne and the Venetian style Merchant in Collins Street.

A popular media personality, Guy is a judge on the top rating My Kitchen Rules. He co-hosted the Italian special series of Food Safari series for SBS with Mauve O’Mara, has made regular appearances on MasterChef, A Current Affair , Today Show, Sunrise and across all networks as talking abut and presenting food from all angles as the fun, flamboyant, skilled and entertaining Chef. On the Seven Network, Guy also starred alongside Neil Perry and Guillaume Brahimi as an Ironchef.

Internationally, Guy has made television appearances around the world, from breakfast television in Italy and the US to providing hospitality as a Masterchef across activities for G’Day USA.

Guy enthusiastically shares his love and excitement for tradition and in creating the exceptional dish on stage, at festivals and for corporate special experiences. He has plenty of stories to tell relating to his family heritage, the history of recipes, and his own personal journey as one of Australia’s most successful Chefs.