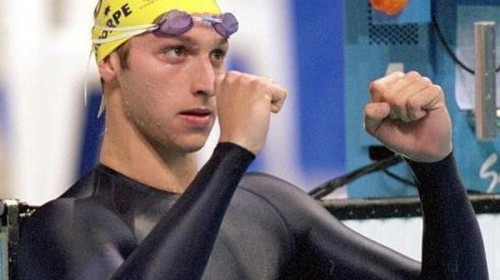 Ian Thorpe, affectionately known around the world as ‘Thorpedo’ is without a doubt one of the most successful sportspeople Australia has ever produced.

Overcoming an early allergy to chlorine, Ian burst onto the swimming scene at the New South Wales Short Course Age Championships in 1994 by winning nine gold medals and at six feet tall, he was almost unstoppable. Four years later and at the age of 14, Ian edged out fellow Australian, Grant Hackett in the 400m Freestyle to claim the first of his 11 World Championship titles.

From then, the Medals, Titles and World Records continued to flow, and his achievements are nothing short of amazing.

Since retiring from the pool in 2011, Ian has used his profile to campaign for change and his efforts as an activist, advocate and mentor have been recognised throughout Australia and around the world.

In addition, Ian has fronted campaigns for his current partners Adidas, Optus, The Star, Vortex Spas and Specsavers whilst also providing his expert commentary for Network 7 at the 2018 Commonwealth Games, Australian Swim Trials and FINA World Championships. A true testament to Ian’s character, he has been an Ambassador for global sports giant Adidas for over 20 years.

OUT OF THE POOL

Ian Thorpe is available for a range of corporate speaking and MC arrangements.

“Ian Thorpe is arguably the greatest swimmer ever… His abilities and skills have inspired a generation of young swimmers.”
Lord Sebastian Coe, 2011

“People have been impressed that Ian was so positive, so happy, personable, well spoken and the amount of time he gave. People raved about Ian and walked away after the evening with a great feeling.”
Tim Pragram – National Sales Manager of Samsung Telecommunications