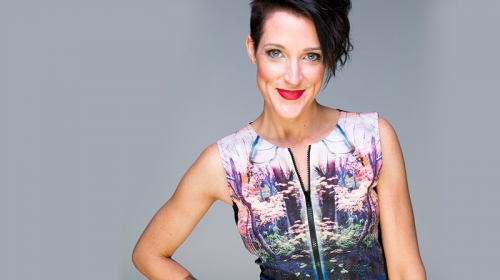 As the co-host of Melbourne’s top rating FM breakfast radio program, Fox FM’s “The Matt and Jo Show”, Jo Stanley is one of Australia’s most successful radio and comedic talents.

Brought up in Victoria, Jo always wanted to be an actor, a fact which is evidenced by her chosen degree – a Bachelor of Arts with Honours in Drama and Theatre Studies which she completed at Monash University.

Following her degree, Jo began writing and performing stand-up comedy, a talent that has taken her all around the country, including overseas. It was during one of Jo’s stand-up shows that she was discovered by Fox FM and given the chance to showcase her talents on the “Sunday” night show. After successfully convincing the guys at Fox FM to let her take the reins of the breakfast show, Jo was partnered with Matt Tilley and “The Matt and Jo Show” was born.

Although Jo has proved herself to be an irreplaceable fixture over at FOX FM, she has also appeared on a number of television shows across such networks as ABC, Comedy Channel, Network Ten, Seven and the Nine Network. Since her discovery in a dingy Collingwood pub over 10 years ago, Jo has graced our screens as a regular panelist on Channel Ten’s “7PM Project”, “The Circle”, “Good News Week”, “The Panel” and “Australia’s Brainiest Quiz Show”, Channel 7’s “Good as Gold”, “Thank God You’re Here”, “Sunday Brunch” and Channel Nine’s “Clever”.

In 2007, after years of interviewing some of the worlds most prolific musicians, Jo decided it was time for her to try her hand at singing by signing up to appear on Channel Seven’s “It Takes Two”. Partnered with singer Anthony Callea, they battled it out against other Australian celebrities making it all the way to the Grand Final where she finished in a highly respectable, second place, and more importantly had an absolute blast!

Jo has worked on a number of short films over the years which culminated in her setting up her own production company, Headspace. Headed up by director and producer Darren McFarlane, who coincidentally also happens to be married to Jo, Headspace currently has a number of projects in development, including a short film for “Tropfest” and a screenplay for a feature film.

Jo’s warm and infectious personality was clear to see when writing her weekly opinion column for Melbourne’s Sunday Herald Sun. It’s perhaps her ability to make people laugh and tell a good story that caught the eye of the publishers at Hardie Grant, and in 2010, Jo landed a book deal to write a novel for young girls called “Introducing Cleo Roberts”, targeted at girls aged 10-14 years.

In 2009 Jo became a mum to Willow Charlotte, and in between her busy schedule, Jo loves nothing more than enjoying the joys of motherhood and training for her next marathon (so far, she’s run a full marathon (42km) and two half-marathons (23km each). Jo say’s on her love for running, “For me, running is an analogy for life – you set short-term goals and keep achieving them and before you know it you’ve achieved something big”.

2012 is set to be another jam-packed year for Jo with her continued commitment to “The Matt and Jo Show”, and the launch of her novel. Whilst her warm and quirky sense of humour has won her legions of fans on the radio, so too has her work as an MC and host at corporate functions.

Jo is also an ambassador for the Ronald McDonald House and Big Issue, a patron for The Lighthouse Foundation and supports the Salvation Army.