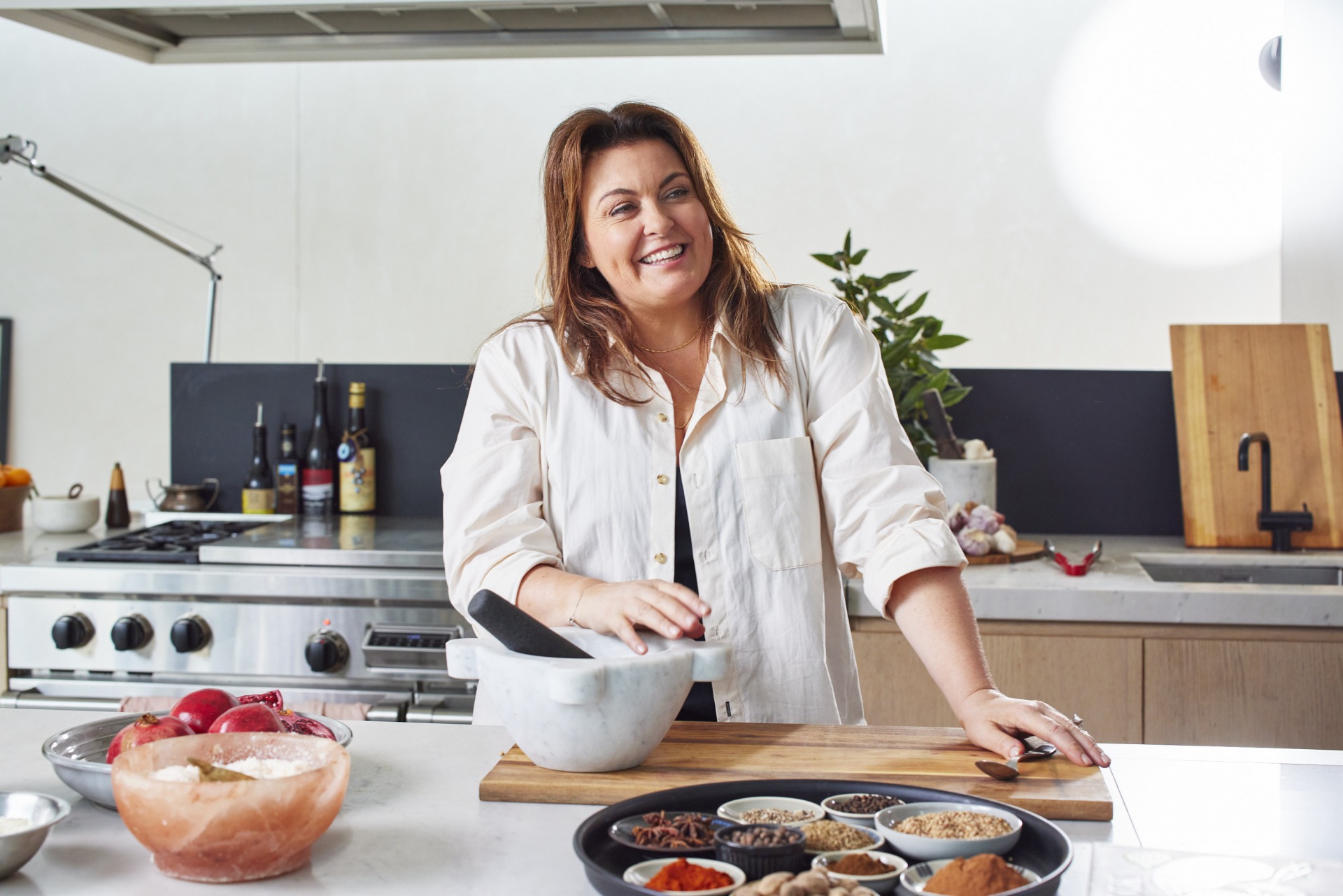 Karen Martini is an award-winning chef, restaurateur, author and television presenter. Her food message is drawn from her professional cooking career, her Tunisian-Italian heritage and from the challenges of feeding nutritious and stimulating food to her family.

In 2021 Karen joined forces with Michael Gebran to open her brand new restaurant, Hero, in Melbourne’s iconic ACMI building, as part of Hospitality M – where Karen takes the role of Founding Partner / Creative Food Director and Chef. Karen was also the founding chef at the critically acclaimed Melbourne Wine Room and Sydney’s Icebergs Dining Room and Bar. As executive chef of both restaurants, she held two chef’s hats in Sydney and Melbourne, and won, with Icebergs, the 2004 Best New Restaurant Award from The Sydney Morning Herald. After 15 years at The Melbourne Wine Room, Karen and her partner Michael opened St Kilda’s much-loved pizzeria mr. wolf which they stepped back from and sold in 2021.  Karen finished 2021 on a high being named one of Melbourne Food & Wine Festival’s “Legends of 2021”, in the Chefs, Restauranteur, Hospitality Professional sector.

Karen’s contribution to print media has included roles as food editor for Fairfax’s Sunday Life Magazine and Epicure/Good Living lift-out for several years. In 2019 she returned to the paper as a food Columnist for the Good Weekend magazine supplement.

Karen is the author of the cookbooks, Salads & Vegetables, New Kitchen, Home, Everyday, The Karen Martini Collection, Feasting, Cooking at Home and Where the Heart Is.

2022 sees the release of her biggest book to date: ‘COOK: The Only Book You Need in the Kitchen’. In this deeply personal publication, no less than 6 years in the making, Karen shares a lifetime of cooking, eating and learning about food. COOK is an essential collection of more than 1000 recipes, from old favourites to brilliant new dishes and is sure to become a fixture in kitchens around the country.

For over a decade, Karen has been the resident chef on Australia’s longest-running lifestyle television series, Better Homes and Gardens, along the way sharing in seven consecutive Logie Awards. Karen also appeared as a judge on Seven’s reality cooking program, My Kitchen Rules, and co-hosted three series of The Intolerant Cooks. Other television credits include Karen chef on Lifestyle Café for The Lifestyle Channel and Guide to a Classic Christmas, alongside Curtis Stone on Seven, which was shot in her home with the pair sharing recipes for their modern take on Christmas traditions.

Over the years, Karen has cooked for many charity functions, as well as demonstrating and presenting at events and festivals.  She has been a key presenter at The Melbourne Food & Wine Festival and Sydney International Food Festivals,  and live shows around TV formats My Kitchen Rules and Better Homes and Gardens, taking the audience through her popular television recipes in real time.  Also on stage, Karen turned interviewer and conducted an intimate conversation with Yotam Ottolenghi live on stage at Melbourne’s Athenaeum Theatre.