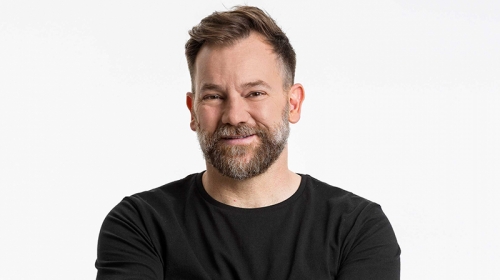 Lehmo is one of Australia’s most experienced and well travelled comedians. Lehmo’s live work has seen him headline at comedy clubs for well over fifteen years and work all corners of the globe – USA, UK, Ireland, South Africa, Singapore, Malaysia, Hong Kong and Thailand.

Lehmo has also become Australia’s number one ‘combat comic’, having completed seven ‘tours of duty’ performing for our troops abroad. These tours have seen Lehmo perform in army bases in East Timor, Iraq, Kuwait, UAE, Afghanistan, Egypt, Qatar and on a number of naval ships around the world.

Lehmo is also a regular on the festival circuit having performed at the Edinburgh Fringe Festival, the Adelaide Fringe Festival and the Melbourne International Comedy Festival (1998, 2002 to 2017). These shows have included the following:

“Christmas in Baghdad” – about doing comedy for our troops

“The Family Lifeboat” – about navigating life as a new father

Lehmo also once held the Guinness World Record for the most jokes told in an hour (549).

Lehmo has performed for businesses big and small throughout Australia and south east Asia. These functions have included AGMs, team bonding days, Christmas dinners, conferences and the list goes on. Having spent ten years working in the corporate world as a chartered accountant Lehmo is perfectly qualified for any such function. Lehmo knows exactly what it takes to put a smile on a corporate face. He’s even completed an entire festival show on the subject – the very successful “Taxing Lyrical”.

Lehmo can be heard on ABC Radio’s Grandstand on weekends, and on the Triple M network across the week.

Being in radio since 2003 Lehmo has interviewed everyone from Prime Ministers and Premiers to award winning actors and rock n’ roll legends.

Prior to Gold 104.3 Lehmo was at Mix FM in Melbourne with Brigitte Duclos, the national drive show on Triple M with Wil Anderson. And prior to this Lehmo’s radio career started on the number one rating SAFM breakfast show in Adelaide.

Lehmo is currently a panelist on the very popular network 10 news comedy program The Project, and the host of AFL comedy quiz show, The Beep Test on Fox Sports.

He also stars in the Logie winning and critically acclaimed Working Dog TV production Utopia which airs on the ABC and Netflix.

Lehmo was also a host on the hugely popular AFL show Before The Game with Dave Hughes, Mick Molloy, Andy Maher and Neroli Meadows. The show aired for 11 years and was Logie nominated for best sports show on 9 occasions.

Lehmo is no stranger to tv though, having also appeared on the following shows – Have You Been Paying Attention?, Hughesy We Have A Problem, Good News Week, Rove Live, Studio 10, The Circle, The Glasshouse, Stand Up Australia, 11am, Hey Hey It’s Saturday and Stand Up Live (UKTV).

Lehmo has also played cameos in two feature films, including the latest Working Dog film Any Questions For Ben?, played a guest role on Neighbours (as himself) and has starred in a string of TV ads.

Lehmo is a regular contributor to a number of magazines and newspapers and has just penned his first book, a memoir titled This Shirt Won’t Iron Itself.

“Lehmo was absolutely exceptional. His tone and comedy were perfect and he was the highlight of our night.”
Manuella Perche, UNICEF

“Lehmo had the audience in stitches and had perfectly tailored his performance for the group. I would highly recommend him.”
Bradley Thomas, FINPRO

“Lehmo was a great hit and everyone has enthusiastically told me how much they enjoyed his show.”
Dave Fowler, Ronald McDonald House

“Lehmo….. you had 300 accountants and guests in stiches from the moment you walked on stage at our National Congress in Melbourne. You have a great ability to work the room and get maximum enjoyment for all. We have had so much positive feedback on your performance and hope you can come back again soon! Thanks a million!”
Catherine Cleary, Institute of Public Accountants

“The room of over 500 guests in hysterics and was undoubtedly a highlight of the evening! Extremely funny and appropriate performance, lovely guy and a pleasure to work with.”
Royal Melbourne Hospital

“Lehmo was an excellent MC and fitted perfectly for our event. He was easy to work with and was flexible with the continual changes to the run sheet.”
Australian Sports Commission

“Lehmo is a fantastic personality to work with and ensured that the our dinner was a huge success, I would recommend him to any organisation looking to put some fun and enthusiasm into an evening.”
Greg Stirling, Senior Brand Manager, Jacob’s Creek Wines

“Lehmo is to be congratulated for his preparation and delivery as it resulted in a super gig and we had lots of positive feedback from a potentially tough audience. At a charity golf day there was nothing below par in Lehmo’s performance! We greatly appreciate his support for our Foundation and do not take this for granted. He will do us any day.”
Mark McGill, General Manager, McGuinness McDermott Foundation

“I have been meaning to email you all day to thank both you and Lehmo. I’m pretty sure it was the most successful event in the 2 years the Committee has been organising these functions in terms of numbers attending, and we received lots of positive feedback afterwards. I think all of us could relate to some of the things Lehmo dreaded about being a ‘professional’, which made the talk relevant as well as very funny.”
Stephanie Burke, Young Professionals of South Australia

“A seasoned performer on the comedy circuit, Lehmo does not disappoint. His show is a safe bet for quality entertainment he gives a relaxed performance and interacts with the audience. After starting with some improvised material, Lehmo goes into his ‘confessions’, where he recounts a series of stories from his time growing up in the country and entering the comedy profession. He gives a polished performance which leaves the audience all smiles.”
Dale Clarke, The Messenger

“Lehmo’s Fringe show, ‘Confessions of a Harmless Mind’, was funnier than a woman with a bottle on her head (if you don’t get the joke, you better go see his show). Lehmo exceeds expectations with a natural stage presence and plenty of gags from his own experience. Performed upstairs at the Rhino Room, the intimate setting created a bond between performer and audience, which Lehmo used well to his advantage. Refreshing and funny, one of the funniest moments of this show was a clip of Lehmo’s short stint on ‘Red Faces’ a year or two ago. Lehmo’s strength is storytelling, rather than jokes with punch lines, and by avoiding bad language and sexual innuendo he reaches a broad spectrum of people.”
Bonnie Hallion, Independent Weekly (Indaily)

“Lehmo is one of Adelaide’s favourite funny men, and it’s not hard to see why. He’s Aussie, he’s confident, and he’s willing to take the piss out of himself. ‘Confessions’ is a litany of embarrassing anecdotes of the ‘of course, I was drunk at the time’ variety. Anyone who likes beer and footy and blokey banter will love it – and there is something in it for the rest of us as well. Lehmo’s trip down the shame file in memory lane includes an appearance on ‘Hey Hey It’s Saturday’s Red Faces’ – it’s a corker of a confession. Upstairs at the Rhino Room is a cosy little spot for humiliating revelations.”
Tory Shepherd, The Advertiser

“It’s true what Lehmo said: many of life’s tragedies, mishaps or faux pas can be turned into great dinner party conversation. But for a comedian, that same mishap can become ten minutes of hilarious comedy, and Lehmo isn’t holding back at all as he confesses some of the more stupid moments of his life. Sharing some footage of a ‘Hey, Hey, It’s Saturday Red Faces’ appearance was funny, but his reasons behind doing it in the first place were even more amusing. Lehmo shared some of the mastermind ideas that teenage boys can come up with for a slice of drunken fun, and even confessed a 14-year-old ripper secret that had everyone in stitches. But, if you want to see the biggest confession of them all, head to his show on Wed Mar 21 when the mate he’s been keeping the secret from will actually be in the audience. What a hoot!”
Rip It Up

“A rare talent who hits the target every time – Lehmo hands out the laughs in an inspired and memorable fashion.”
The List, Glasgow

“With serious questions being asked of the motivations behind the war in Iraq, Lehmo’s show is not only timely, but also insightful, political and hysterical.”
Liz Walsh, The Advertiser 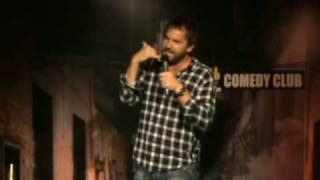 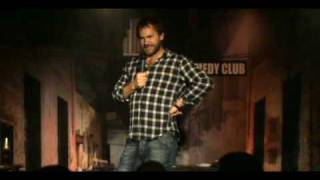