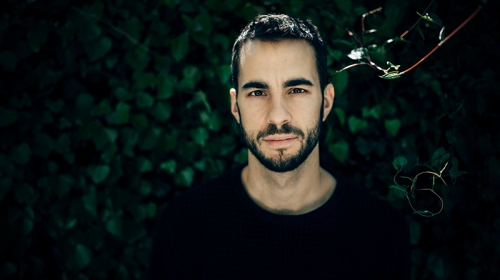 In between performing with Björk, The Cinematic Orchestra and Anoushka Shankar, the prodigious Hang player and percussionist Manu Delago will be touring Australia in 2020 ‘Handmade Tour’ with his 4 piece multi-instrumentalist band.

Sat behind his first drumkit, at the age of two, Manu Delago embarked on a life of music. He began accordion lessons four years later, and at the age of 10, he started playing the piano. With rock as his main influence, the Austrian musician played drums for various bands, from the age of 14. In 2003, Manu simultaneously discovered his passion for writing music, when he began playing the Hang (handpan), an enchanting new sound sculpture from Switzerland. That same year, his rock outfit HotchPotch won the Austrian Band Contest and toured Austria, Germany, Italy and Spain. After specialising in classical percussion at Mozarteum Salzburg, he moved to London and studied jazz drums at the Guildhall School of Music & Drama and composition at Trinity College of Music.

In 2007, Manu uploaded his solo work Mono Desire to YouTube and recieved more than 5 million views. It was the most popular Hang video on the internet and charted in the Top 30 of all instrumental videos on YouTube. At this time, he also founded his own band Manu Delago Handmade and the duo Living Room and his first albums were released on Work Records and Tru Thoughts Records. These recordings featured guest artists such as Erik Truffaz, Andreya Triana and Douglas Dare and were well-received by industry and media tastemakers, including Nitin Sawhney, Radio 2’s Alex Lester and Jamie Culllum.

Manu’s move to London also facilitated inspiring collaborations with numerous genre-leading artists. Most notably, in 2011 he recorded for Björk’s Biophilia album and has since been her touring drummer, playing three world tours with the Icelandic singer. He started writing and performing with sitar player Anoushka Shankar in 2013, earning a Grammy nomination for his work on her album Land of Gold. Manu has also leant his talents to the recorded works and live performances of The Cinematic Orchestra, Olafur Arnalds and Psy-Trance producers Shpongle.

As Hang player and percussionist, Manu Delago has performed in prestigious venues on six continents, including the Royal Albert Hall, Royal Festival Hall and Barbican in London, Carnegie Hall in New York, the Sydney Opera House and the Fuji Rock Festival in Japan.

On his 2017 album Metromonk, Manu focussed on electronic sound manipulation of the Handpan and the live video of the track Freeze was filmed in the Austrian Alps, using 14 unmanned cameras. The rapturous response to this Red Bull Music video premiere, inspired an even more audacious project – Parasol Peak, an album and film co-release, where Manu leads seven musicians on an alpine sound expedition, stopping at various locations and altitudes, to record live.

Celebrated Handpan player, percussionist, producer and composer Manu Delago presents his solo album ‘Metromonk’ which finds this boundary-testing artist distilling and delicately exploring extremes of dynamics and mood; manipulating the Handpan in experimental and inventive ways, the many voices and tones of this rare instrument are given top billing among a minimalistic palette of beats and acoustic sources.

This new music builds on an illustrious spell for Delago, whose ambitious 2015 LP ‘Silver Kobalt’ won over tastemakers from BBC 6Music’s Tom Ravenscroft and Don Letts to Radio 2’s Alex Lester, Nitin Sawhney and Jamie Cullum (who snapped him up for a Maida Vale session), and was also loved by i-D, Clash, DJ Mag and more; the Silver Kobalt Tour boasted 80+ thrilling live shows with his band, Manu Delago Handmade. Meanwhile, the Austrian prodigy maintained his busy schedule of engagements as a go-to musician for some of the world’s leading artists. Recording and playing live with Björk, and drumming for The Cinematic Orchestra, he also co-wrote Anoushka Shankar’s ‘Land Of Gold’ LP and is a key band member on her world tour.

The world’s leading Handpan player, Manu Delago has had over five million YouTube views and featured heavily in BBC Radio 4’s recent documentary on the instrument. While his last album saw him diversifying with multiple layers of synths, electronic production and a wide range of instruments, ‘Metromonk’ restores his virtuosic Handpan playing to centre stage.

Manu Delago will be touring the new album with his band which features Isa Kurz (vocals, violin & keys), Alois Eberl (trombone & accordion) and Chris Norz (drums & percussion). The performance is delicate and sophisticated, moving with ease between heavily rhythmic and free-flowing spherical sections. Each of the three performers takes on several instruments, displaying the great musical diversity of every member of the ensemble, a definite must-see.

Almost Thirty
Sun in the North
Wandering Around

The Up Coming
Brighton Journal
B24/7

Pioneer of the hang (handpan), captivating musician Manu Delago has announced the Australian release of a an awe-inspiring movie and accompanying album, Parasol Peak, in which Delago leads an ensemble of 7 musicians on a mountaineering expedition in The Alps. Along the way, the group perform a collection of brand new compositions in different locations, at varying altitudes.

The Austrian-born composer was discovered by Björk, who first invited him to perform alongside on her Biophilia tour. He is now a fixture of Björk’s live line-up and has also toured with The Cinematic Orchestra and Olafur Arnalds. Further, he earned a Grammy-nomination for his work on Anoushka Shankar’s album Land of Gold, performed Hang on Poppy Ackroyd’s latest album ‘Resolve’ and appeared as a soloist with the London Symphony Orchestra.

It is for this reason that the musician spends a great deal of his life on the road and in studios, collaborating with various artists as well as writing, recording and performing his previous two critically-acclaimed electronic-driven albums Silver Kobalt and Metromonk. This was how Parasol Peak became an exercise in the artist removing himself from studios, tour busses and laptops, and seeking to compose and perform both within and as part of nature, using only totally acoustic instruments.

Delago was not only inspired to incorporate the ensemble’s natural surroundings in The Alps, but also the percussive sounds of the group’s climbing gear. Delago comments: “Of course performing on acoustic instruments has been done for thousands of years, so I wanted to add an extra component – nature, or more precisely the Alps. I wanted to utilise our surroundings by incorporating lots of percussion sounds like trees, water, little rocks as well as the gear that we were carrying, such as helmets, carabiners or ice axes.

“In general, I find limitations inspiring and in the case of Parasol Peak I was limited to a fixed ensemble of 7 musicians. The different locations also brought various limitations, which affected how I composed the music. At some locations we were vertically aligned and couldn’t see each other. At others we couldn’t hear each other, or we were trying to survive while playing.”

Director and producer Johannes Aitzetmüller knew that the expedition would be one of his most difficult shoots yet. He comments: “Because I know the mountains and the situation I knew I could handle it, but what about the rest of the crew? How long can we shoot and how many times can we film the same performance over and over again in these conditions?

“On almost every location we faced a tough climb first, then very cold conditions (physically and also playing), snow, installation time of the audio, instruments out of tune and finally – the shooting. We sometimes could film only 2 takes, because the instruments were out of tune again, or the fingers too cold or the icy wind blowing too fast. The audio engineer, Michael Reisigl, installed a network of recorders, cables and microphones all over the rocks. On the right and left side there were sometimes more than 50m of vertical rock – so falling was no option. It was crazy how he performed. Further, we knew that the crew shouldn’t wait too long doing nothing because of the cold, the motivation and the instruments. And I knew that the filming had to be perfect first time – there won’t be another chance.”

The expedition posed life-threatening conditions for the ensemble, which at times had Manu questioning the project. “There were several moments of physical struggle and anxiety in the group” says Manu, “but that makes playing music together even more emotional”. A drastic unseasonal temperature drop causing heavy snowfall complicated the journey further and made for a bigger challenge musically, with the group performing in exposed locations at freezing temperatures.

“There were definitely moments when individuals in the group would have turned around and left the expedition,” Manu admits. “But because we could only do it as a group, we had to strongly support each other. We had to help each other carrying instruments and gear, as well as help each other in overcoming anxieties and exhaustion.”

The result of the struggle that the group endured is a completely rare, once-in-a-lifetime piece of work – both stunning visually and remarkable musically. The album could very much sit wonderfully amongst the contemporary classical giants of the present, but there is no escaping its distinctiveness – with flecks of European folk embedded in the brass and accordion melodies, as well as prog drones performed on the strings and handpan, ornamented by taps and whistles from various natural sources. Sonically, without the visual, the evidence of nature is present throughout.

“For most of us it was physically the hardest thing we’ve ever done,” Manu comments, summarising the journey. “But it was an incredible feeling to reach the summit and overcome those challenges. More than anything – the whole expedition was simply an incredibly connecting experience for the ensemble.”

A Closer Listen
The Telegraph
Exclaim!

Could be String Orchestra or Full Orchestra with additional woodwinds, brass.

Repertoire can include of Manu‘s compositions:

“A man with a head full of ideas.”
Songlines

“A masterful and sensitive musician.”
The Telegraph

“To use words like spellbinding and mesmerising don’t do justice to the sounds he created.”
Confluence

“An incredible musician in everything he plays.”
Nitin Sawhney

“A legend in the making.”
The Ransom Note 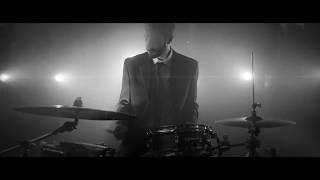 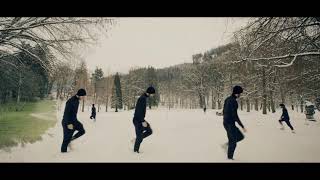 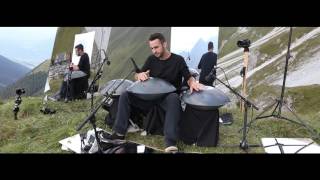 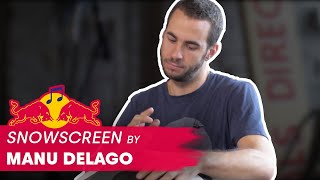 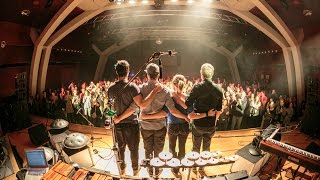 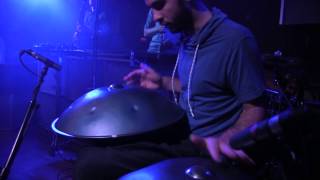 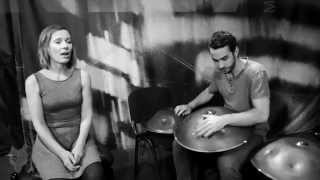 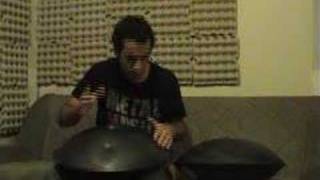 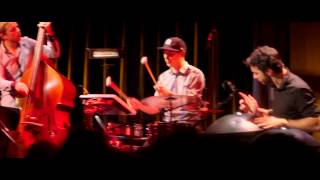 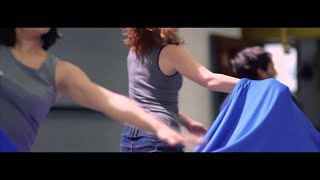 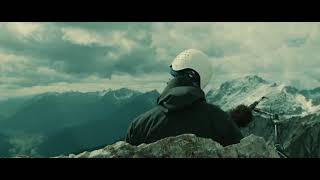 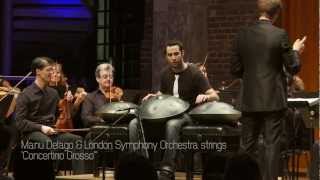