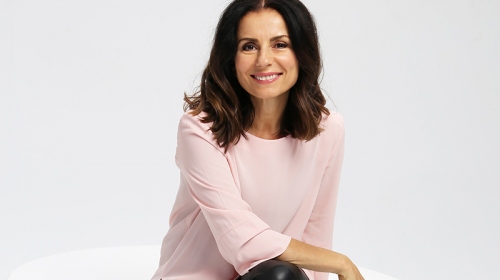 Mary is one of Australia’s most loved actors, comedians & corporate speakers. In 1987 she became a member of the ground-breaking stage show ‘Wogs out of Work’, where her comic creation Effie was born. Her diverse TV, film and stage credits are numerous. Mary has written two books, ‘Effie’s Guide to Being Up Yourself’ and her critically acclaimed memoir ‘All I Know’. Mary’s warmth, popularity and professionalism makes her one of the most in demand public speakers.

For over 3 decades Mary has entertained and inspired the top corporate, financial, political, sporting and cultural communities. Whether the events are big or small, public or private Mary’s experience, warmth and humour has kept her in huge demand.

Mary’s special gift is seeing possibility in everything and everyone. Her ability to articulate that in a impactful, funny and memorable way is what sets her apart.

Mary is an actress, comedian and writer. At University she studied performing arts, journalism, anthropology and psychology. Mary’s passion was always in creating characters and stories which reflected the Australia she grew up in.

In the late 80’s Mary was part of the ground-breaking stage show ‘Wogs Out of Work’, hit TV sitcom ‘Acropolis Now’ as well as the comedies ‘Effie: Just Quietly’ and ‘Greeks on the Roof’. TV dramas: ‘Wildside’ ’Skirts’, ‘Grass Roots’ ’Secret Life of Us’ ‘Rake 2’. On stage Mary also starred in ‘Wogarama’ ’Star Wogs: The Ethnics Strike Back’ MTC’s ‘Sylvia’ and her two critically acclaimed one-woman shows, ‘Waiting for Effie’ & ‘Effie The Virgin Bride’. Mary’s film credits include her AFI nominated performance in ‘Mull’, ‘Nirvana St Murder’ and cult favourite ‘Hercules Returns’. Mary has been a regular commentator on Channel 9’s ‘Today Show’.

Mary has won a Logie Award and Variety Award for her work as her much loved character Effie.

BOOK
All I Know by Mary Coustas

Mary’s memoir ‘All I Know’ revealed her decade long attempt to become a mother, her 23 IVF attempts and her multiple losses – including the death of her still-born daughter Stevie.

Her story touched the hearts of the nation after it was revealed in a 5 page book extract in the ‘Good Weekend magazine’ as well as on television 2 separate ‘60 Minutes’ stories. Mary’s motto of ‘Nothing good comes from giving up” was uttered on ’60 Minutes’ moments after giving birth to her healthy and beautiful daughter Jamie on the 25th Nov 2013.

“I am just writing to say the biggest thanks to Mary for being a part of our ‘At the Table’ series on Monday. Mary was absolutely fantastic and shared her stories with such honesty and warmth and had everyone mesmerised with her strength and humour that she has displayed in times of such sorrow and struggle.
We really loved working with Mary and hope to do more with her in the future.”
Madeleine Wilson
Publicity Manager – David Jones Limited

“I wanted to send you a personal note to express what a pleasure it was to have met you, and how wonderful it was to add your incredible talent and contribution to this year’s event. Thank you!”
Cheryl Cecchetto
Producer – G’Day USA, The Oscars Governors Ball

“We thank you both for giving us the honour to be with us. You mastered the event with such an impressive appearance. It was beyond expectation and all guests enjoyed it so much. Thank you for dedicating your time to deliver such an inspiring speech. You moved us all and how much you have taught us!”
Dr Terri Picciolo
President – Red Cross