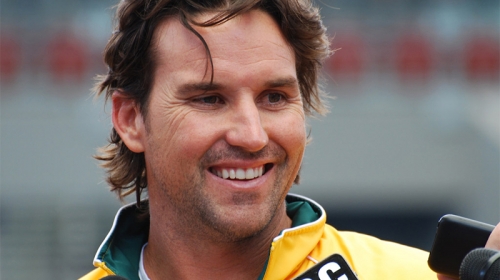 Tennis ace Pat Rafter has become one of Australia’s favourite tennis heroes. Two-time Grand Slam champion – Rafter began playing tennis in outback Queensland, Mount Isa at the age of five and has a genuine and heart-warming story. He is without a doubt one of our greatest and most loved Australians.

Rafter’s first attempt to get into the Australian Institute of Sport was unsuccessful, but he wasn’t deterred. He began to play professionally in 1991 and his first acknowledgment came in 1993 when he was named ATP Newcomer of the Year. He then had a string of achievements to follow, including in 1998, being the first Australian to be ranked in the top five back to back seasons since John Newcombe in 1973-74. To then take over number one in the world position in 1999. In 2000 Rafter reached his first Wimbledon finals defeating Andre Agassi, and again in 2001 in the semi finals to reach the Wimbledon finals for the second consecutive year. However Rafter never walked away with the trophy.

Having said this, Rafter has experienced many career highlights including his back to back victories at the US Open in 1997-1998. Rafter has captured a total of 11 singles titles and 10 doubles titles in his career. Climbing his way to the top of the world ranking hasn’t always been easy for Pat – struggling with a number of serious injuries and in 1996 he was forced to sit out more than three months of the circuit with recurring wrist and ankle problems.

In addition to Pat’s commitment to tennis he also is an avid environmental campaigner, being the official spokesman for Coastcare, an Australian organisation funding community groups to care for local beaches, and the founder of the Cherish the Children Foundation established in 1999. This earnt him the ATP’s Arthur Ashe Humanitation Award and he has also won the Stefan Edberg Sportsman Award four times.

On the 10 January 2003, Pat officially announced his retirement from tennis. The 30-year-old’s last event was the Davis Cup final in Melbourne at the end of 2001, where he scored a win over Sebastien Grosjean. He then had to pull out of the decisive singles match because of a shoulder injury, and the Australian team lost 3-2 to France. “I will have regrets that the Wimbledon and Davis Cup trophies are not in my cupboard, but that’s sport – you win some and you lose some,” said Rafter after retirement. “However, I feel I can leave the game satisfied with my achievements, knowing that I gave it my all.”

Pat is now enjoying life with his wife Laura and their first son Joshua.

Rafter’s contribution to the sporting world will be long remembered. The third youngest of nine children, Rafter was born in a tight-knit family in rugged outback Queensland. From the most humble of beginnings, he rose to the pinnacle of his sport and left his mark, which will remain strong. Pat Rafter’s is a motivating story that you will never forget.

Patrick Michael Rafter, was born in Mt Isa, Queensland on the 28th December 1972.

Pat’s interests away from the tennis court are surfing and golf.

In 1993 he was named the ATP Newcomer of the Year.

In 1997, He received Diploma of Honour by the International Committee of Fair Play, for gesture of fair play that may have cost him victory. During January 1997 tourney in Adelaide, reversed a line call in second set tie-break to virtually hand the match to his opponent.

Pat won his first US Open Grand Slam and became the first Aussie to win this open since John Newcombe in 1973.

In 1998, he defended his title by winning the US Open, becoming the first Australian to win back to back US titles since Neale Fraser in 1959-60.

He was also awarded the Honorary Ambassador for Queensland and was presented with the keys to the City of Brisbane.

He received the Australian People’s Choice Award for Male Sports Star two years in a row being 1998 and 1999.

The Patrick Rafter Cherish the Children Foundation was officially launched in February 1999, when Pat donated his Australian Open earnings. His sister Louise runs the Foundation. The Foundation is aimed at giving assistance to kids wherever they need it.

In 2000, Pat won “The Bill Brown Community Award” – In recognition of Sporting Achievements and Service to the Community.

In 2002, Pat was named Australian of the Year, and was inducted into the International Tennis Hall of Fame and the Sport Australia Hall of Fame in 2006.

Since retiring from Professional Tennis Pat now enjoys spending time with his family. He devotes his available time to his charity “Cherish the Children Foundation”.