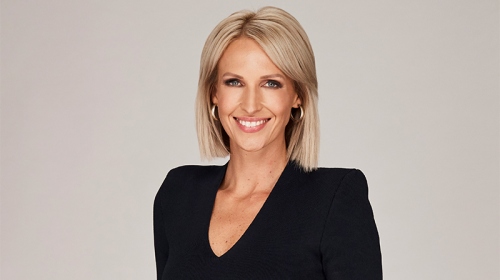 Rebecca was born in Adelaide and educated at Blackwood High School, before completing a Journalism degree at the University of South Australia.

After winning a cadetship with the ABC in Adelaide in 1998, Rebecca embarked on successful postings in Port Pirie, Darwin and Brisbane before returning to her home town as a senior reporter and presenter for ABC television and radio news.

In 2004, Rebecca was a finalist in the Walkley Awards for excellence in Australian journalism. She was named Journalist of the Year at the 2005 SA Media Awards.

Presenting Adelaide’s flagship 10 News First bulletin since 2006, Rebecca has cemented herself as a highly-respected and admired personality within South Australia’s broadcast media industry and across the community at large.

She writes a popular parenting column in local magazine Kiddo and is a proud ambassador for the Animal Welfare League, Kickstart for Kids, the Premier’s Reading Challenge and the Port Adelaide Football Club.

Rebecca is married with three daughters, Grace, Milla and Frankie and has a rescued dalmatian called Henley.