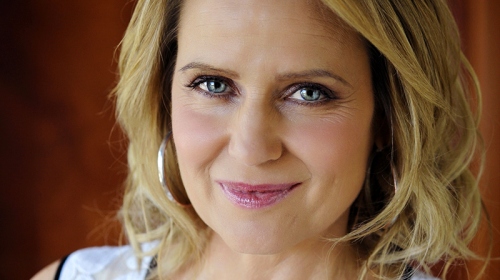 Shaynna Blaze is an Award-Winning Interior Designer who has created stunning interiors in residential homes and commercial spaces for over twenty years. Armed with a vast portfolio of work in various fields of design, Shaynna is also a successful commissioned artist.

In 2008, Shaynna’s talents were brought to a broader audience through her role as Interior Designer and Co-Presenter on the The LifeStyle Channel’s Award Winning Show, Selling Houses Australia. Arguably the LifeStyle channel’s most successful show (Season 7 broke the record to become the highest rating series in subscription television history), Selling Houses Australia is the series that just keeps on giving, back for its eighth incarnation in 2015. Shaynna will be back helping home-owners change their lives with her design expertise to get the ‘unsellable’ homes back on the market. It was through her role on Selling Houses Australia that Shaynna was able to showcase her design skills, along with her warm and approachable presenting style, which have consequently led to regular appearances as a design expert across a number of mainstream shows including The Morning Show, The Circle, Today Tonight, A Current Affair and The Renovators.

In 2012 Shaynna joined the team of design experts as a Judge on Nine Network’s Award Winning reality show The Block. Joining judges Neale Whitaker & Darren Palmer- Shaynna will be back on our screens in 2015 with more Blocktastic action.

Shaynna has also launched her own YouTube TV channel that offers viewers an insightful look into how Shaynna achieves her breathtaking designs, whilst offering easy to follow steps. Shaynna uses the interactive platform to communicate to a large audience the value that can be added to a property, simply by making a few home improvements – www.youtube.com/shaynnablaze.

As Shaynna’s profile has grown, so too has her visibility across a number of other media related platforms. Shaynna’s opinion is highly sought after in areas including design, colour and trends and includes having written a fortnightly column in the Herald Sun, a monthly online Q&A for The LifeStyle Channel, a regular contributor to Grand Designs Magazine as well regularly updating her online blog with design inspirations. A popular choice with design magazines including Elle Decoration; Vogue Living, OK! Magazine, Belle, Cosmo & Home Living, it was only a matter of time before the big publishing houses started to sit up and take notice and in March 2013, Shaynna’s debut book Design Your Home, a coffee table book published under Penguin Australia, hit the shelves. Following the huge success of Shaynna’s debut book, Penguin Australia commissioned a second book, Design with Colour and Style, available from March 2015.

Shaynna is COLOUR Creative Director for Taubmans whom are also one of the major partners of Selling Houses Australia.

In 2013, Shaynna was commissioned by leading Australian furniture maker, Molmic to design a range. The beautiful new range, Elegant Muse is Proudly 100% Australian designed and made in Melbourne. The 8 piece collection draws its inspiration from a time of elegance and grace, with a charming colour palette of snow whites, stone neutrals and calming blues. Shaynna is also designing a lighting range for another major Australian wholesaler, OneWorld Collection. In July 2014 Shaynna partnered with The Attic Group, one of Australia’s leading providers in attic and loft conversions. Shaynna describes the partnership as a great alignment, stating that the “Attic Group has, for decades been able to assist homeowners create more space in their existing homes by transforming their roof spaces to attic storage areas or attic rooms.”

In 2015 Shaynna will reprise her role as Judge for the reece Product Design of the Year Awards, as well as Home Design Magazines, GreenInterior Awards Australian Living. In March 2014, Shaynna launched her exclusive rug range, Textured Coast by Shaynna Blaze that she has designed for The Rug Collection, as well as her continued partnership with Enjoy® on her flameless candles- the Shaynna Blaze Signature Collection.

In December 2014, Shaynna performed at Vision Australia Carols by Candlelight. Having spent her earlier years performing at jazz clubs, Shaynna took to the stage for what was a dream come true, as she explains: “I was incredibly honoured and humbled to sing at the recent Vision Australia Carols by Candlelight on Christmas Eve. It was the most amazing experience, I’m still trying to wipe the smile off my face of how much fun I had on the night.

When Shaynna is not filming or working on commissioned designs through her interior design company, blankcanvas INTERIORS, she likes to use her time to inspire others. Shaynna is available as a guest speaker or host at both private and corporate functions, where she focuses not only on design, but on our social environment and how it effects how we live and communicate.