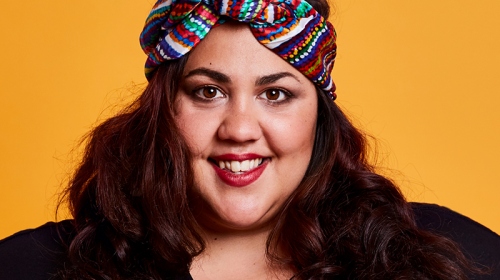 Steph Tisdell is a major up-and-comer in the Australian Comedy Scene. After cutting her teeth in the UK and winning the Deadly Funny National Grand Final in 2014, Steph has been collecting awards and accolades wherever she goes and building an impressive TV, radio and print credit list most recently having appeared on ABC’s prestigious Oxfam Melbourne International Comedy Festival Gala, The Project and was handpicked by Nazeem Hussain to perform at The Stand Up for Christchurch Benefit which aired on Channel 10.

2018 was a huge year for Steph, she toured Australia with the Aboriginal All Stars and Melbourne International Comedy Festival Roadshow and debuted her first solo show “Identity Steft” at Adelaide Fringe Festival, where she won the weekly award for best emerging talent, and The Melbourne International Comedy Festival where she was nominated for the illustrious Best Newcomer Award.

Steph is a proud Indigenous woman and is making a fast rise as one of Australia’s funniest Aboriginal comedian’s putting her in a unique position to encourage other Aboriginal artists to come forward and showcase why they’re the funniest race in the world. She has a background in social sciences and a huge passion for Aboriginal rights and advocacy, Steph loves to talk about her experiences as a Ydinji woman and what her culture means to her.

Steph’s mission first and foremost is to empower those around her, using comedy as a way to observe the world, finding the funny in heartbreak is an important tool for everybody. After all, comedy is just tragedy plus time. Through her own stories of struggle and resilience, and honest, insightful views on her culture and her identity, she invites audiences to laugh along and learn the best ways to start “bridging the gap”.

With a magnetic personality and quirky stage presence that skips between gleefully playful to biting political satire, Steph’s comedy is vulnerable, real and insightful. Her witty observations challenge stereotypes in non-offensive and hilarious ways. Through stories of her family history and musings of a future that Australia should embrace, she is a memorable speaker with a memorable message.

With an ever-growing fan base that spans Australia wide, Steph is a successful and in demand speaker and has performed at events for many high profile organisations including: Brisbane City Council, DATSIP, Life Without Borders, AEMEE, BridgIT Water Foundation, Melbourne Girls Grammar, Future Females, YARN and World Wellness Group.

“warmly funny, immediately relatable, fast on her feet and generous with her audience ★★★★”
Time Out

“Riotous, audacious and incredibly smart…Tisdell’s message of empathy over apathy is one that we all need to hear ★★★★”
Arts Hub 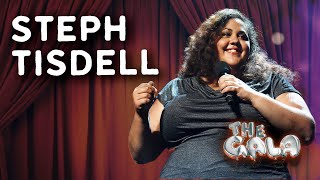