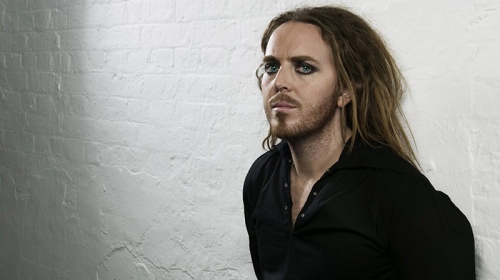 Tim Minchin is an Australian composer/lyricist, musician, comedian, actor, writer and director. He was born in October 1975 and grew up in Perth, Western Australia, the second of four children. He attended Christ Church Grammar School, The University of Western Australia (Bachelor of Arts) and The WA Academy of Performing Arts (Advanced Diploma of Contemporary Music). He spent his twenties writing songs, playing in bands, acting in plays, composing for theatre, playing piano for cabaret artists and penning tongue-in-cheek beat poems.

Soon after he married his university sweetheart, Sarah Gardiner, in Perth in 2002, they moved to Melbourne. Failing to garner record company support for his 2001 album, Sit (with band Timmy the Dog) and struggling to attract the attention of an acting agent, Tim survived playing keyboards for Melbourne cover-band, The Sea Monkeys, and piano for solo artists – most notably Melbourne composer, lyricist, actor and satirist, Eddie Perfect.

In 2003 he debuted his first solo comic cabaret show, Navel – Cerebral Melodies With Umbilical Chords, for the Melbourne Fringe Festival. Performed with a bass player and drummer in a 50 seat venue called The Kitten Club, it contained songs, poems and sketches. It was modestly successful, inspiring Tim to perform solo more often. After regular performances at the legendary Butterfly Club during 2004, he premièred Dark Side at the RMIT Kaleide Theatre as part of the 2005 Melbourne International Comedy Festival (MICF). Good reviews and word of mouth attracted the attention of Karen Koren, a well-known producer, who was scouting for new talent for her Edinburgh Fringe Festival venue, The Gilded Balloon.

In August that year, Dark Side became one of the most acclaimed comedy shows at the Edinburgh Fringe, and Tim won the Perrier Best Newcomer Award.

Sarah and Tim’s journey from their early days in Melbourne to the birth of their first child in London in November 2006 was captured in Rock n Roll Nerd, a feature documentary made by their close friend, Rhian Skirving. The critically lauded film was shown in Australian cinemas in 2008.

In the five years that followed, Tim toured the UK and Australia as a solo performer, attracting growing audiences and many awards. He also performed in Canada, the US, Europe, Scandinavia and New Zealand. By 2010, he was performing with symphony orchestras, and selling out some of the world’s most famous venues, including The Royal Albert Hall and the O2 Arena in the UK, and The Sydney Opera House in Australia. Over this time he released five DVD titles: So Live (Aust) and So F**king Rock (UK); Ready for This? filmed at the Enmore (Aust) and Ready For This? filmed at the Apollo (UK); and Tim Minchin and The Heritage Orchestra Live at The Royal Albert Hall.

In 2009, he was commissioned by the Royal Shakespeare Company (RSC) to write the music and lyrics for a stage adaptation of Roald Dahl’s Matilda. Directed by Matthew Warchus and with a book by Dennis Kelly, the musical opened in Stratford-Upon-Avon in 2010. Matilda the Musical has gone on to become one of the most critically and popularly successful musicals of the last 20 years, winning more than 50 international awards including a record seven Olivier Awards and five Tony Awards. It continues to run on the West End, had a long and successful Broadway run between April 2013 and January 2017, played for six months in Toronto, Canada, and is currently touring the US for the second time. It opened at the Lyric Theatre in Sydney, Australia in August 2015, and has gone on to play Melbourne, Brisbane, Adelaide and Perth. More on Matilda the Musical here.

In 2010, Tim narrated Shaun Tan’s The Lost Thing, which went on to win the Oscar for Best Animated Short Film.

During a trip to LA, for a charity concert in April 2012, Tim successfully auditioned for the role of Atticus Fetch in Showtime’s David Duchovny vehicle, Californication. He played rockstar Atticus in 10 episodes of season six. See the season trailer here.

Later that year, Tim was cast as Judas Iscariot in the spectacular arena production of Andrew Lloyd-Webber and Tim Rice’s Jesus Christ Superstar. Co-starring Ben Forster as Jesus and Melanie C as Mary, it toured the UK and Australia in 2012-13. There are some quotes on Tim’s performance in the Quotes/Reviews section. The show was released on a DVD which is available worldwide. A few clips can be found here.

That same year, he was awarded an Honorary Degree of Doctor of Letters by The University of Western Australia (UWA), for his contribution to the arts. He gave the “occasional address” for the graduation ceremony, the video of which which went viral. You can see the video or read a transcript of Tim’s speech here.

In 2014, Orion Publishing released a graphic novel of Minchin’s beat poem, Storm. It was created by DC Turner and Tracy King, following the success of their animated movie of the same piece which has been viewed well over three million times.

In 2015, he appeared as Northern Irish ex-convict, Smasher Sullivan, in The Secret River, an Australian drama mini-series adapted from Kate Grenville’s acclaimed novel and directed by Daina Reid for the ABC.

Towards the end of 2015, Tim guest starred as a security guard in No Activity, a comedy drama production by Jungleboys for Australian streaming service Stan. Directed by Trent O’Donnell, the series follows two detectives on a stakeout.

In February 2016, Tim wrote and released Come Home (Cardinal Pell) in support of survivors of clerical abuse. The song continues to raise funds and has been shortlisted for the 2017 APRA Song of the Year.

He is also working on a stage musical adaptation of Groundhog Day, with Danny Rubin (who wrote the original screenplay) and Matthew Warchus. Following its hugely successful and acclaimed limited run at The Old Vic, London, in the summer of 2016, the show transfers to the August Wilson Theatre on Broadway, Spring 2017.

February 2017, Tim started filming as Friar Tuck in Robin Hood: Origins, scripted by Joby Harold and directed by Otto Bathurst. It’s scheduled for release in the US March 2018.

Tim is an Associate Artist of the Royal Shakespeare Company (RSC) and the Old Vic Theatre, an ambassador for The Prince’s Foundation for Children and the Arts, a patron of the British Humanist Association, and patron of the West Australian Youth Theatre Company (WAYTCo). He is a keen supporter of Roald Dahl’s Marvellous Children’s Charity (UK), Médecins Sans Frontières (MSF), the National Autistic Society (NAS) and the Los Angeles homelessness charity, PATH.

“If you’re going to play big spaces, this is the way to do it; with a 55-piece orchestra and a juggernaut full of showmanship, making this a big show in every sense…a superlative night out.”
Chortle

“Minchin…the insanely gifted Australian is rounding off the year with an audacious show that sees him accompanied on stage by the 55-piece Heritage Orchestra…Taken all in all, a thing of jaw-dropping wonder.”
Daily Telegraph, London

“Tim Minchin comes on and the crowd explodes… the kohl-eyed, back-combed, piano-playing Minchin… lives up to the hype. A slight, barefoot figure, he is a consummate pianist as well as an excellent comedian.”
Daily Telegraph, London

“If there’s an artist more naturally disposed to a hybrid of pop and orchestration, I do not know his name”.
The Age, Melbourne

“Don’t be conned by the use of “vs” in the advertising. Minchin and his orchestras work magnificently together for 2.5 hours”
The Australian

“All up, Ready For This? is one of the most entertaining 2 hours of comedy you could experience. It’s a night of constant laughter, entertainment and deep thinking peppered with witty lyrics and first class musical prowess. An absolute must…”
Daily Telegraph, Sydney

“Tim Minchin is a genius, pure and simple. He is to musical comedy what Charles Darwin was to evolution and what Einstein was to physics and moustaches. You’d be hard pushed to find a more sublimely talented comedian. Handsome, hysterical and divinely musically gifted – you can go off people, you know!”
Tim Arthur, Time Out

“One of our all time favourite comics. This remarkable Aussie is a musical genius and quite unlike anyone else out there.”
Time Out

“Guaranteed to bring the house down.”
Metro

“One of the funniest and most amazing shows you will ever see.”
Daily Telegraph, Sydney

“Simultaneously an excellent stand-up comedian, a purveyor of physical comedy, an accomplished musician and a lyricist of diabolical ingenuity. Witty, smart, and unabashedly offensive.”
The Age, Melbourne

“Minchin is a genuine musical virtuoso, whose songs are constructed and sung with an attention to detail that would make Rufus Wainwright sit up and look nervous. And that’s even before we get to the jokes.”
The Times, London

“Take out a second mortgage, sell the car, and put the money on the safest bet you’ll ever make in this uncertain world: that Tim Minchin will be the next big thing in musical comedy”.
Time Out, London

“He plays like an angel, sings like the rock star he always wanted to be and has a devil of a sense of humour. This is an extraordinary performer.”
The Scotsman, Edinburgh

“Tim Minchin is simply superb in the role. He sings amazingly well, but it is his face full of weary intelligence that keeps the heart of the show pure, in the midst of all the amplification (the sound is very much that of a rock gig) and razzmatazz…But it is Minchin who proves that Jesus Christ Superstar is a work of conceptual genius.”
The Telegraph

“Tim Minchin’s Judas Iscariot commands attention from the moment he steps on stage. Understated, focused and powerful, Minchin’s vocal oozes raw emotion and tells the story in an array of compelling colour. When Minchin is on stage all other sensation is lost, you live, you breathe to hear and see what he has to say or do next.”
The Yorkshire Times

“Tim Minchin, as Judas, is possibly the real star of the show, looking every inch the rock star and with an astonishing voice to match. His portrayal is both menacing but compassionate.”
The Nottingham Post

“Tim Minchin’s voice and performance are impeccable and his Judas is charismatic and strangely alluring. His rendition of Superstar is bold and fervent, and his death scene is the most poignant moment of all.”
Herald Sun, Australia

“It is Minchin, though, who dominates — as he must.

Two of his set pieces are bookends of the show. He reveals a fine higher vocal register as he bursts out of the blocks with Heaven on Their Minds and then leads the full ensemble cast of 50 in the rousing finale of the title song, Jesus Christ Superstar, which had the audience on their feet.”
West Australian 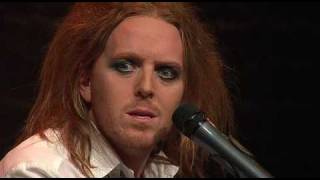 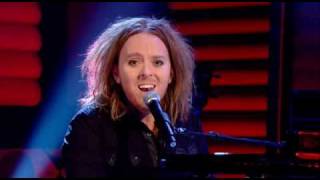 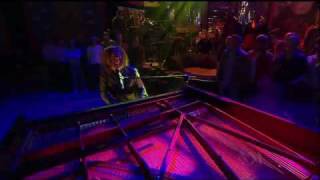 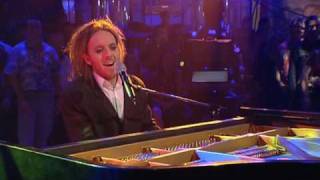