Tom Ballard is a comedian who gets to perform the ancient art of stand up all around Australia and the world.

His desperation to make people laugh stretches back to high school when he took part in the Melbourne International Comedy Festival’s Class Clowns competition and didn’t win, which made him sad and bitter. He then went on to be a RAW Comedy national finalist, a member of the Comedy Zone, a nominee for the prestigious Golden Gibbo Award and the youngest ever recipient of the MICF Best Newcomer Award for his debut hour, Tom Ballard Is What He Is.

Tom co-hosted the triple j breakfast show with his dear friend Alex Dyson from 2010 to 2013 and they were very very silly but they won an ARIA for their trouble anyway. After four years of early mornings, Tom decided to hang up the headphones to concentrate on stand up, TV and sleeping.

Having appeared on everything from The Project to Spicks’n’Specks to It’s A Date, in 2014 Tom hosted Reality Check: his very own panel show for ABC TV, which dissected the insane world of reality television. He’s twice guest-hosted the political discussion show Q&A to critical acclaim, or at least to no widespread embarrassment.

His body of work at the 2016 MICF earned him a nomination for the prestigious Barry Award for Most Outstanding Show. Tom was the inaugural recipient of the Pinder Prize, named in honour of the late, great John Pinder, allowing him to return to Edinburgh later in the year where his show The World Keeps Happening was nominated for the Best Comedy Award. He was also invited back to perform at Just For Laughs Montreal, where he took part in Comedy Central’s Jeff Ross Presents Roast Battle and performed on LOL Live presented by Kevin Hart.

Tom also hosts his own hit interview podcast Like I’m A Six-Year-Old, tweets like a mofo and occasionally suffers from eczema. He’s very pleased to meet you.

“Ëxcellent, unflinching and at times brutally funny…[Ballard’s] natural poise and charming on-stage persona means he appears likely to have a long career ahead… ★★★★”
The Age

“One of the most fearless and hilarious voices in Australian comedy.”
Wil Anderson 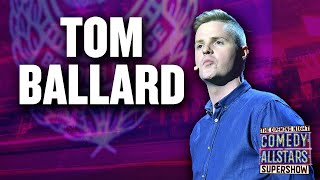 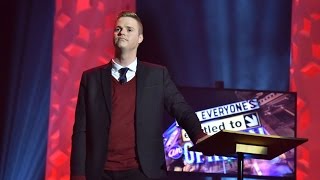 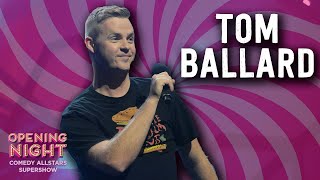