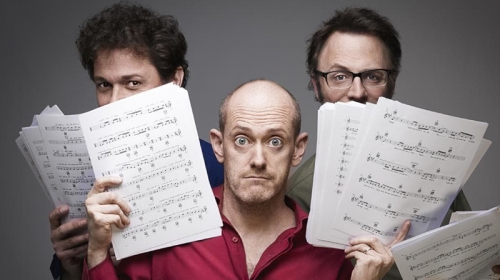 Since their earliest shows Tripod have made a consistent habit of juggling comedy, music and narrative in endless exhilarating combinations, consistently evading neat definitions whilst always striving to stay worthy of their fans’ time.

The boys started out in the thriving Melbourne pub scene of the mid 90s, a strange anomaly even then, opening for cranking horn-driven party bands with a meager three voices and one guitar, harmonising quirky pop oddities before a largely nonplussed punter. Miraculously they gained a keen following, who happily stuck with them as they underwent the first of many metamorphoses – in this case, into regulars of the Melbourne International Comedy Festival.

Soon afterwards Tripod became an institution on national radio via their Song in an Hour segment on the TripleJ morning show, where their facility to concoct a fully fledged tune complete with harmonies and middle eight – according to deliberately obtuse listener suggestions – endeared them to a generation, and provided an invaluable training ground for a rich career in songwriting of all shapes and sizes.

TV followed, including four seasons as writer/performers on network TV sketch show Skithouse – the album of which, Middleborough Road, won them an ARIA – as well as a year as regulars on the exuberant cabaret showcase Sideshow on the ABC, where they performed with everyone from the Cat Empire to Colin Hay.

The boys have had significant success on the international stage – including one particularly scorching season at the Edinburgh Festival where the Scotsman newspaper gushed “..sometimes Five Stars isn’t enough”. They have created numerous musicals including the magical Tripod Versus the Dragon in collaboration with Megan Washington and featuring Elana Stone, and have toured the smash hit cabaret show Perfect Tripod: Australian Songs where they showcase their singing chops in a breathtaking a-capella quartet with Eddie Perfect.

Tripod continue to compose and arrange, including a regular stint as songwriters for the Cartoon Network. Their commission for the Melbourne Symphony Orchestra, an all-original symphonic love letter to gaming entitled This Gaming Life (in collaboration with BAFTA winning games composer Austin Wintory), opened at Hamer Hall to rave reviews.

The second half of 2015 saw Tripod continue their relationship with Wintory. Along with Wintory’s score, Tripod’s 6 murder ballads for Ubisoft’s Assassin’s Creed Syndicate picked up multiple Original Soundtrack of the Year awards.

In 2016 Tripod will be releasing a songbook: 101 Tripod Hits, and performing a national tour to accompany it.

Tripod continue to bring an insane level of craft in both comedy and music and combine them in a rich and satisfying way – an ability that has cemented them as a much loved cultural fixture in Australia.

“One of the funniest things happening in Edinburgh right now, or possibly the world, there’s hardly time to catch your breath in between bouts of uncontrollable laughter. These guys are unbelievable musicians too. Sometimes five stars just aren’t enough.”
The Scotsman, Edinburgh

“A beautifully performed rollercoaster ride of captivating nonsense, fabulous comedy and music… definitely go and see them!”
The Scotsman 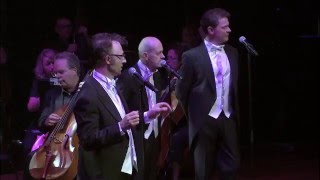 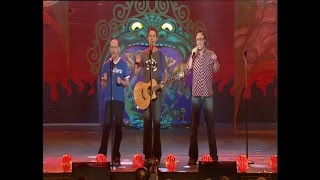 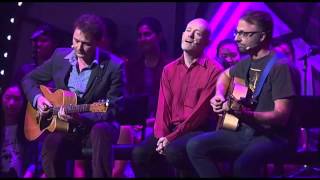